Under Attack, Doctor At Kyiv Hospital Prepares For Worse 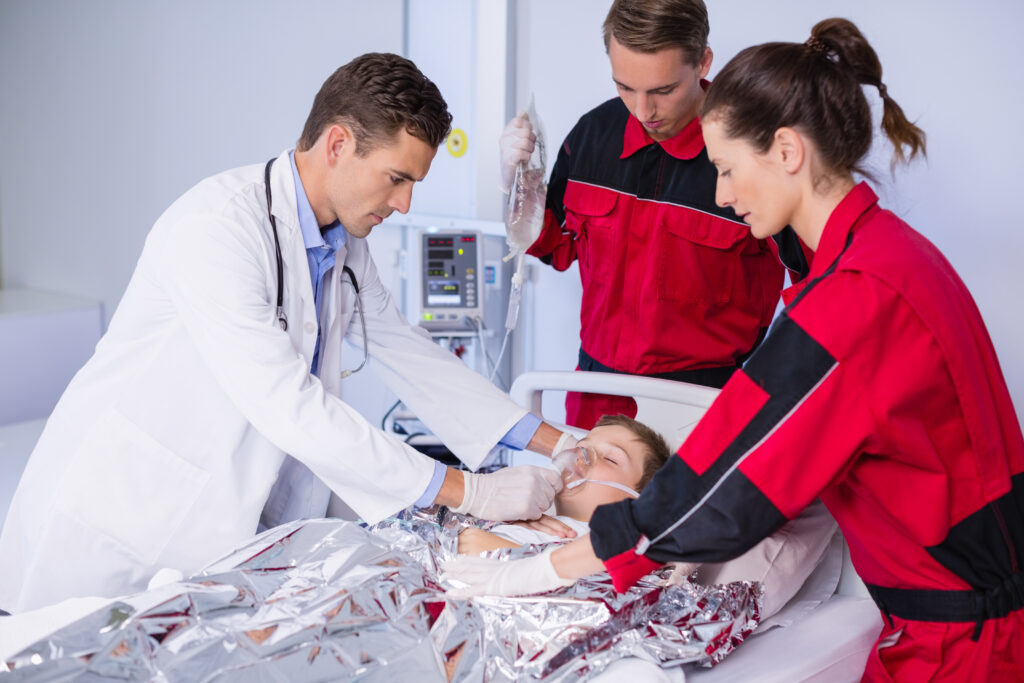 Dr. Vitaliy Krylyuk said an uneasy calm has settled in the city’s largest downtown hospital as Russian troops mass on the outskirts of Kyiv.

Traditional injuries such as car accidents and gunshot wounds are treated by doctors at the Kyiv Hospital of Emergency Medicine. However, Krylyuk is concerned that things will quickly deteriorate if Russian missiles are fired at the city or enemy troops are stationed close to Ukraine’s capital.

Ukraine’s capital has been relatively quiet this week after a flurry of skirmishes and shillings in the first days of Russia’s invasion. On the outskirts of Kyiv, troops are fighting, and surgeons in outlying hospitals have been busy tending to the wounded. On the other hand, the extra time has allowed Kyiv’s main trauma hospital and Ukraine’s Ministry of Health to prepare.

Vitaliy Krylyuk, an emergency medicine physician with the Ukrainian Ministry of Health, assists in preparing Kyiv’s Hospital of Emergency Medicine.

Doctors are staying at the hospital 24 hours a day, he said, to plan, organize, and brainstorm.

Emergency planners have attempted to fill in any gaps that might arise if the number of people with life-threatening wounds outnumbers the hospital’s ability to care for them, as reported by USA Today.

They wanted to figure out which hospital entrance ambulances should use to quickly get patients to hospital beds. Documents on how to prioritize patients, ensure patients can breathe, secure blood transfusions, and notify family members if a loved one is killed or injured have been drafted by government planners.

It’s not an academic exercise in the least.

According to Ukraine authorities, a hospital complex in Mariupol was bombed on Wednesday, killing three people, including a child. Russian Foreign Minister Sergey Lavrov dismissed the claim on Thursday, who said the hospital had been cleared of patients and was being used as an extremist base.

Ukrainian and Western leaders dub the attack a “war crime.” French President Emmanuel Macron denounced the attack as a “shameful and immoral act of war.”

Viktor Liashko, Ukraine’s Minister of Health, said the shelling was one of 63 hospital attacks since the war began, killing five health care workers and rendering ten people unable to walk.

According to Krylyuk, his medical team cannot dwell on such attacks. The shock of the war’s early days has faded into a calm resolve. “We’re aware of the situation,” he explained. “Our medical staff has remained brave and ready to treat people at all times.”

Many Kyiv residents have gathered in subway stations deep underground for protection from air attacks. Several babies were born in the makeshift bomb shelters, and medics teams were dispatched to provide care.

According to the United States and other Western leaders, Russia could use chemical or biological weapons. Ukraine’s President, Volodymyr Zelenskyy, denied Russia’s claim that Ukraine plans an attack with such weapons on Thursday.

“That worries me a lot because we’ve long believed that the best way to learn about Russia’s plans is to look at what Russia accuses others of doing,” Zelenskyy said in his address to the nation.

The possibility of such weapons, according to Krylyuk, adds to the uncertainty for doctors and medical teams who are reviewing supplies and strategies to “decontaminate” people if exposure occurs.

He also stated that the country is attempting to monitor the Chernobyl nuclear power plant, now under Russian control. One day after the plant lost power, the International Atomic Energy Agency reported losing all communication.

According to Krylyuk, 71 children were killed, and hundreds were injured in the first two weeks of the war. According to him, the death toll has caused deep psychological distress among doctors and citizens alike.

He tries to unwind by conversing with friends and coworkers in Ukraine, Europe, and the United States. He does not, however, relax by watching movies or playing cards. The constant stress and flurry of preparations have taken their toll on him and his colleagues.

Instead, he keeps himself occupied. He double-checks supplies, runs errands, and makes plans for the future. His doctors prepare meals and communicate with their loved ones, says USA Today report.

Despite the civilian attacks, threats, and mounting deaths, he said morale remains high.

He explained, “You must realize that the war in Ukraine has been going on for 15 days.” “However, the days are so long, particularly in the evenings, that it feels like 15 years have passed.”