Menu
America Faces Shortage of Nurses Due to Burnout - medtigo

America Faces Shortage of Nurses Due to Burnout 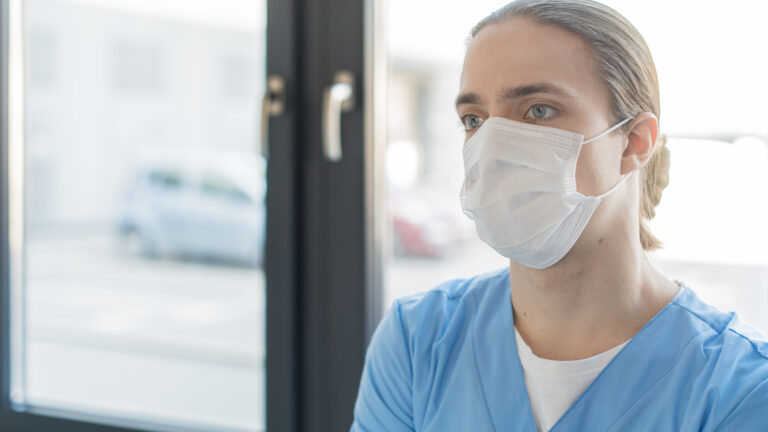 At the age of 15, Mary Ann Evely knew she wanted to be a nurse and began working at a children’s hospital in St Louis.

Evely’s sentiments about nursing haven’t altered in 50 years, despite her work at a hospice unit in Naples, Florida, for the past 20 months.

Three young guys stood outside their grandfather’s chamber towards the start of the Covid-19 pandemic, unable to enter because of the virus.

Evely pushed the grandfather’s bed up against the window so that they could see his face as he died.

“That was the most difficult thing for me,” Evely recalled, crying as she told the story.

While Evely was able to move on from her grief, her 28-year-old daughter Veronica, an intensive care unit nurse in Nashville, Tennessee, called her a year ago and told her, “I can’t do nursing anymore,” after witnessing three millennials die from Covid.

According to multiple studies, anxiety, despair, and weariness among nurses in the United States increased during the pandemic due to increased workload, anxieties of contracting the virus, and watching so many fatalities, among other factors. Healthcare organizations around the country are now attempting to prevent a nursing shortage from worsening and looking for solutions to provide relief to nurses who are ready to retire.

“Everyone has experienced some level of stress and emotional suffering as a result of the pandemic, and nursing is no exception,” said Betty Jo Rocchio, chief nursing officer for Mercy, a Roman Catholic healthcare organization based in St Louis. “It appears that our nurses have had a dual impact, both personally and professionally, and while we say it’s caused professional burnout, it’s more like life burnout.”

According to a recent study by the American Nurses Foundation, 21% of nurses indicated they planned to leave their jobs in the next six months, and half of those who said they wanted to leave claimed it was because their jobs were impacting their health and well-being.

At a recent press conference, Annette Kennedy, president of the International Council of Nurses, said, “They have given their all for a year and a half or two years.” “They’ve put in a lot of time. They’ve worked without rest, and they’ve been asked to do duty without protective gear or assistance.”

According to Rocchio, Mercy had around 9,000 nurses before the epidemic, which was about 1,000 less than the health system required. As Covid patients began to flood hospitals’ emergency rooms and intensive care units, the gap became wider.

According to Rocchio, the system has lost another 500 nurses due to exhaustion, retirement, or better-paying travel nursing posts during the pandemic.

According to Roxanne Vandermause, dean of the College of Nursing at the University of Missouri–St Louis (UMSL), enrolment in the program fell by 20% this year.

According to Rocchio, Mercy is looking for adults already established in other professions and encouraging them to become nurses by offering scholarships and flexible clinical hours for training at its hospitals.

“We’re attempting to position ourselves in such a way that we can assist anyone interested in nursing school in getting through nursing school,” she said.

To compete with one another and travel nursing businesses for employees, hospitals around the country have upped nurse salaries dramatically. According to the Wall Street Journal, the average annual compensation for nurses climbed by nearly 4% to $81,376 in the first nine months of the year, excluding incentive pay.

During the pandemic, Evely, the Florida nurse, did not receive a pay raise, but her employer did give nurses an extra week of vacation, she said. Evely’s vacation time would have been reduced if her husband had been ill with Covid and had to remain home from work.

“I don’t believe nurses look for themselves, and I believe they are underpaid and undervalued, especially lately.” Evely, on the other hand, said before Covid, “I felt like that too.” Evely stays devoted to working in hospice despite that sense and other heartbreak — she lost a 48-year-old fellow nurse to Covid.

“Many people ask, ‘How do you do it?’ And I’m not sure what the proper response is, but I always say, “It’s part of life, and I’m so glad I was able to assist your loved one on their final trip,” Evely explained.