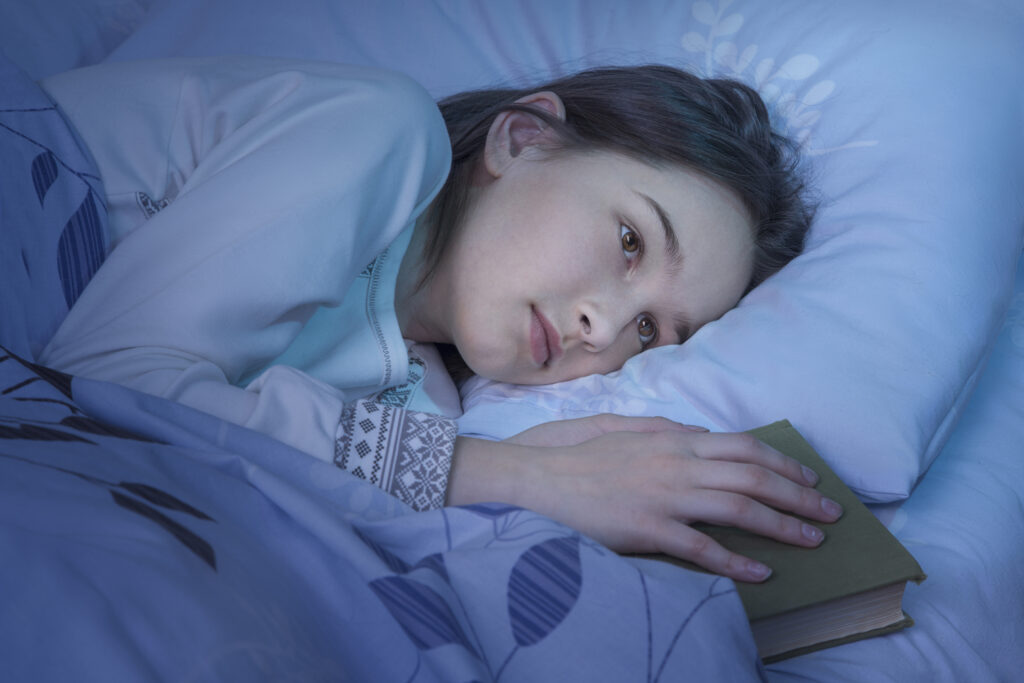 Researchers discovered that 43% of youngsters who have insomnia between the ages of 5 and 12 continue to suffer from it into their 20s and 30s.

According to Julio Fernandez-Mendoza, an associate professor of psychiatry and behavioral health at Penn State University College of Medicine’s Sleep Research & Treatment Center and the study’s primary author, this figure is “far greater than previously thought.”

He and his colleagues pointed out that childhood sleeplessness is not unusual in the study.

“Approximately 20% to 25% of school-aged children experience insomnia symptoms, which are defined as difficulty sleeping or staying asleep,” Fernandez-Mendoza said. This percentage jumps to between 35 and 40 percent among teens.

He explained numerous reasons for this, with genetic predisposition playing a minimal impact compared to medical, behavioral, and environmental influences.

That could include underlying gastrointestinal difficulties or headaches, a “stressful” home or neighborhood environment, poverty or discrimination, or poor sleep habits, such as regularly using electronic devices in bed.

The children (and their parents) completed sleep questionnaires during the study’s first phase, between 2000 and 2005. During sleepovers in a laboratory setting, sleep habits were tracked in real-time.

Insomnia was diagnosed in nearly a quarter of pre-adolescent children.

At an average age of 16, most children had the same examinations as teenagers between 6 and 13. Moreover, a third of the adolescents (36%) suffered from sleeplessness.

Between 2018 and 2021, a third assessment phase was undertaken in a follow-up sleep survey. The average age of the study participants was 24 at the time.

According to the researchers, about 27% of pre-adolescent insomniacs become healthy sleepers as adults. By the time they were in their 20s and early 30s, about 11% of those who had struggled with sleep as teenagers had managed to get rid of it.

However, approximately 19 percent of those who had sleep problems as children continued to have intermittent insomnia as teenagers and adults. More than four in ten were still suffering from chronic sleep deprivation.

According to Fernandez-Mendoza, the findings highlight the necessity of addressing insomnia at a young age to avoid it becoming a lifelong problem.

In many circumstances, cognitive behavioral therapy can be used to treat undesirable sleep patterns, including “using devices or watching TV in bed, worrying in bed, sleeping in on weekends, [or] napping throughout the day, among many others,” he noted. “This form of intervention has long been utilized to help adults and is gathering more evidence and acceptance in youngsters, particularly adolescents,” he said.

However, Fernandez-Mendoza warns that “Sleep medicines should always be used as a last resort when it comes to kid insomnia. Despite its widespread and inappropriate use, Melatonin should only be utilized in extremely particular conditions.”

The findings were published in the journal Pediatrics online on February 17th.

Dr. Carey Lockhart said, “Parents can start with appropriate sleep patterns in infancy.” She works at Seattle Children’s Hospital as a clinical associate professor in neurology, pulmonology, and sleep medicine.

“Creating a stable routine and strong sleep health foundation can be achieved by developing a consistent and calming bedtime routine that is maintained throughout childhood — and teaching healthy sleep habits such as no screens in the bedroom or right before bedtime,” said Lockhart, who was not involved in the study.

“Parents may also help educate adolescents’ time management skills early on,” she continued, “so that teenagers learn, for example, to do schoolwork during the day rather than at night, which can lead to later bedtimes.”

According to Lockhart, such efforts can go a long way toward modifying and enhancing sleeping habits in children and adolescents, reducing the likelihood of insomnia remaining into adulthood.